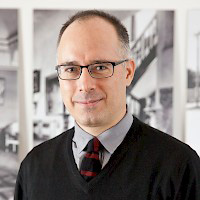 Antonio Somaini is Professor of Film, Media and Visual Culture Theory at the Université Sorbonne Nouvelle in Paris, where he is also Chair of the Department of Film and Media Studies. His research interests include the history of film and media theories, as well as issues in contemporary visual culture, such as the implications of the high and low definition of images, and of the new technologies of machine vision. He can be reached at antonio.somaini[at]sorbonne-nouvelle.fr.