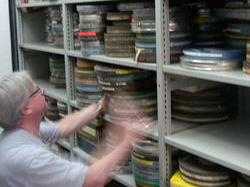 Rick Prelinger, professor of film and digital media at UC Santa Cruz, is an archivist, writer, and filmmaker. With Internet Archive, he built an open-access online repository of historical films beginning in 2000, which now contains 7,000 freely reusable films. His films include the archival feature Panorama Ephemera (2004), which played in venues around the world, and No More Road Trips?, which received a Creative Capital grant in 2012. His twenty-five participatory urban history projects have played to many thousands of viewers in San Francisco, Detroit, Oakland, Los Angeles, New York, and elsewhere. He is a board member of Internet Archive and frequently writes and speaks on the future of archives and issues relating to archival access and futures. With Megan Prelinger, he cofounded and codirects an experimental research library located in downtown San Francisco.